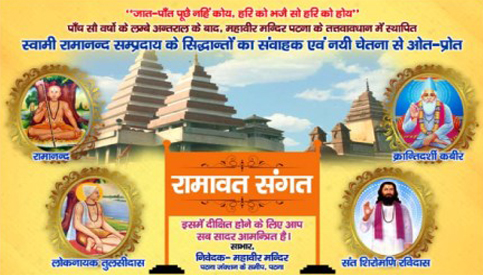 Mahavir Mandir Trust in its recent meeting has taken a momentous decision to establish a new Sangat “Ramavat-sangat” by name. It will come into existence on Kartika Devotthan Ekadashi i.e. 13 November, 2013 after holding a mammoth Sita-Rama Maha-yajna (sacrifice) in Patna. This has been initiated because of the fact that though there are millions of devotees to the deity Hanumanji of Mahavir Mandir Patna, there is no bond between a devotee and the temple.